Today we are going to discuss about the Legal and technical perspective towards Cryptocurrency Bitcoin in Indian Scenario, Bitcoin has always been a gray topic for Government agencies and Investors so here we will discuss about the present scenario and realm after demonetization and impacts with the legal considerations in India.

Bitcoin is a cryptocurrency and completely digital. It was introduced on 31st Oct 2008, by Satoshi Nakamoto and released as cryptography mailing list, as open source software in 2009.

Bitcoin is getting more attention like never before in India because people are having their interest in digital money and due to sophistication.

BTC has its own payment system of transaction. People are searching about it and discussing about the legality. Government & its agencies are concerned because of its popularity and existence.

Let’s understand about the Bitcoin, It is a digital currency which exists in virtual environment only. It is a crypto-currency, because of the use of mathematical functions and algorithms. This has added feature of non duplicity and free from fake physical currency in the payment system. This is the area of concern also, because technology has its own risks or can be manipulated.

Since the last 1-2 years, Bitcoin in India is becoming very popular and people are investing to buy and get the BTC, Since 8th Nov 2016 or demonetization commencement day, Bitcoin price has been increased in India,  that has raised concerned in the government agencies like ED, RBI. Everybody knows the demonetization was happened to curb the blackmoney & unaccounted money for making accounted and taxable that was one of the objectives.

All financial decisions of the country have taken by government agencies in accordance of established law. If we talk about Bitcoin that is not the Indian currency so it is consider as foreign currency so foreign currency is dealt according to FEMA rules and guidelines. In the perspective of Bitcoin it is not possible in the present scenario. The latest announcement of RBI that declared Bitcoin is illegal in India for now.

Bitcoin currency has many advantages for economy of country but also has severe implications if it is used in illegal assignments.

Bitcoin has decentralized system, buyer and seller involve directly without the help of any other party in the channel but to ensure the authenticity of transaction, one entity is required that is known as miner and this process is known as mining. The miners work voluntarily to track and monitor the transactions, the miners can be a big firm with the large infrastructure and specialized systems to mine and monitor the Bitcoin in the world and they provide support to monitor and track publicly available ledger and maintain the blockchain, Blockchain technology (Below mentioned Pictorial Representation) helps to maintain end to end transaction records but without the name or identification of buyers and sellers. So this feature makes it non taxable or out of the scope. The same kind of problem was occurring in paper currency and that creates hardly traceable transaction in the offline payment system or in cash mode.

Bitcoin or this type of currency is future currency; many renowned persons have stated about it because there is no expense in printing and keeping it secure in lockers, bank etc. According to study of US firm, major part of economy of countries spends on the cost of printing, transporting and security.

But digital currency is so economic in the comparison of other traditional paper currency. If we talk about future in India, government is continuously promoting cashless society and digital payment system.

To control and track the money transactions this step is appreciable towards cashless transactions in India. In the present scenario we are depending on plastic money but after the years it will be reduced because of card requirements and its maintenance, economy will be moved on digital currency. This step towards cashless society and demonetization by government has log term effects. Automatically all the money got converted/ converting into digital money then Indian rupee will also one of the options for the future payment system instead of Bitcoin/ other cryptocurrency. Possibly that will control the illegal invasion of foreign currency in India.

Bitcoin is the new gold after the demonetization in India, Bitcoin price has shown rally that can be understand as impact of the same as we now we can see the steady pace in the price.

This is also understood by below mentioned graph. 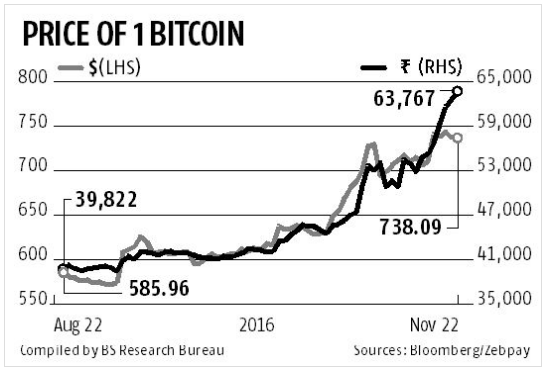 The represented graph is showing figures of before and after the demonetization in the year 2016. Now if we talk about the new financial year 2017 price is Plus 80000 INR. Numbers of Bitcoins in the world are limited so we can understand the demand of Bitcoin, experts are expecting the price will be normal within this year.

There are some technical security issues in the realm of Bitcoin;

Bitcoin has several issues as we have discussed in the above sections legality of its transaction is also the major concern as described but there are several developed and developing countries in the world where Bitcoin is legal and exempted from Tax but financial infrastructure and regulations are different from India. India has large market and fast growing country so there may be loopholes that can be exploited. So with the consideration of these points new regulations and guidelines are necessary if our higher authorities really want to include Bitcoin in the economy then it should be transact or transfer through well developed channels like bank or any financial institute only so the anonymity and tax issues can be resolved. In the end only one practical point is ; just wait for the new guidelines and regulations from RBI.

Disclaimer:All content provided on the “ISECURION” blog is for informational and awareness purposes only. This blog is a compilation of writers views with the help of available images and Graphs on various links.